Sometimes something familiar can still manage to surprise you. This month a recent exploration of some of the former parkland around Lawrence Weston turned up an intriguing new discovery. Some of you will be familiar with the Home Farm buildings on Kings Weston Lane, just below the house. The buildings here once formed the principal farm for the north side of the estate and was farmed and managed directly by the Southwell and Miles families living in Kings Weston House rather than being let to tenant farmers. 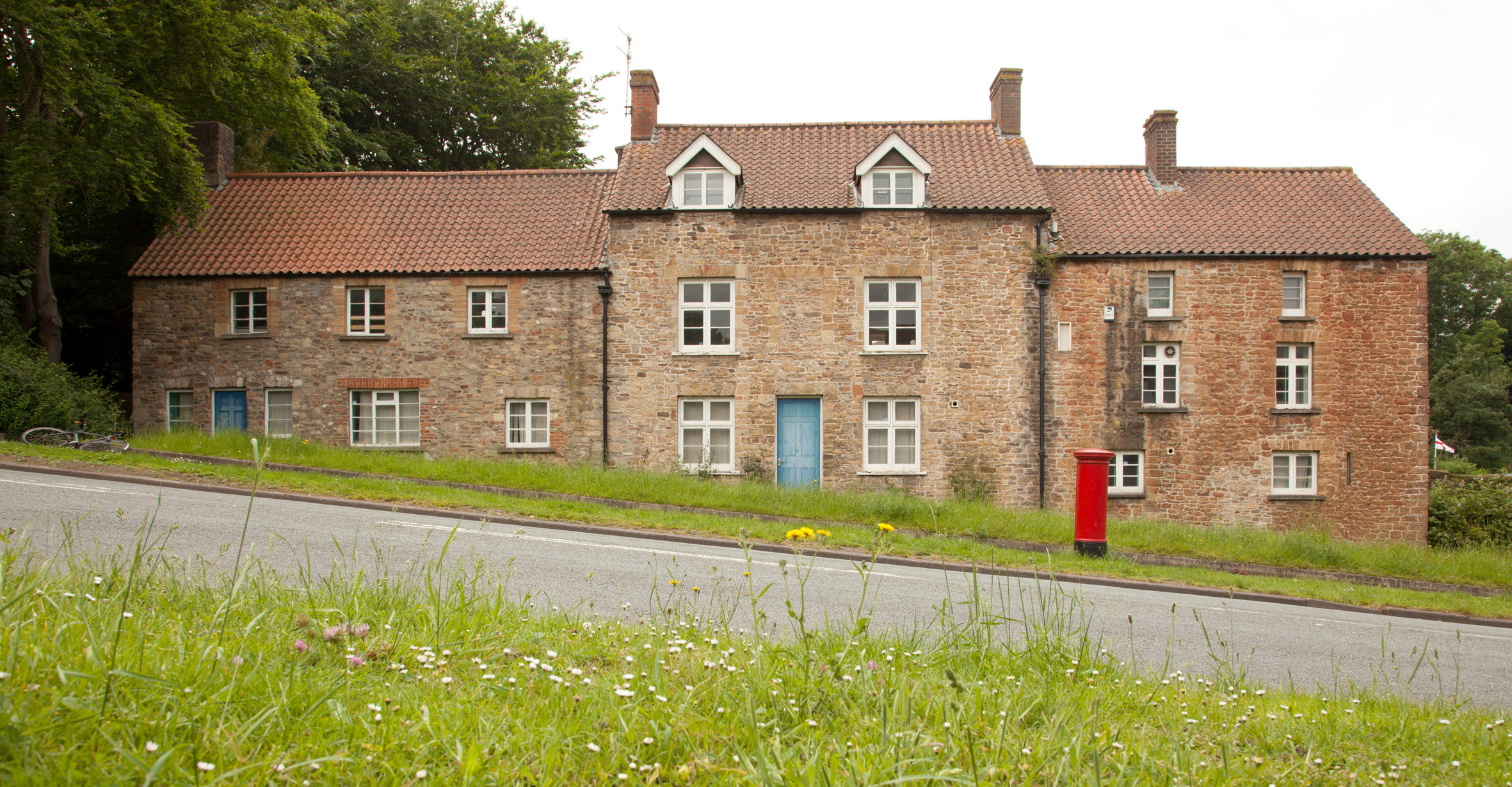 The east front of Home Farm onto Kings Weston Lane.

The main range of buildings survived the post-war development of the parkland as bring converted to a health centre, though many of the outbuildings that once formed the exotic Georgian menagerie were lost.

It is difficult now to establish what purpose the various elements of the building performed. The central portion was, no doubt, the original house, but the north and south wings are unusual. 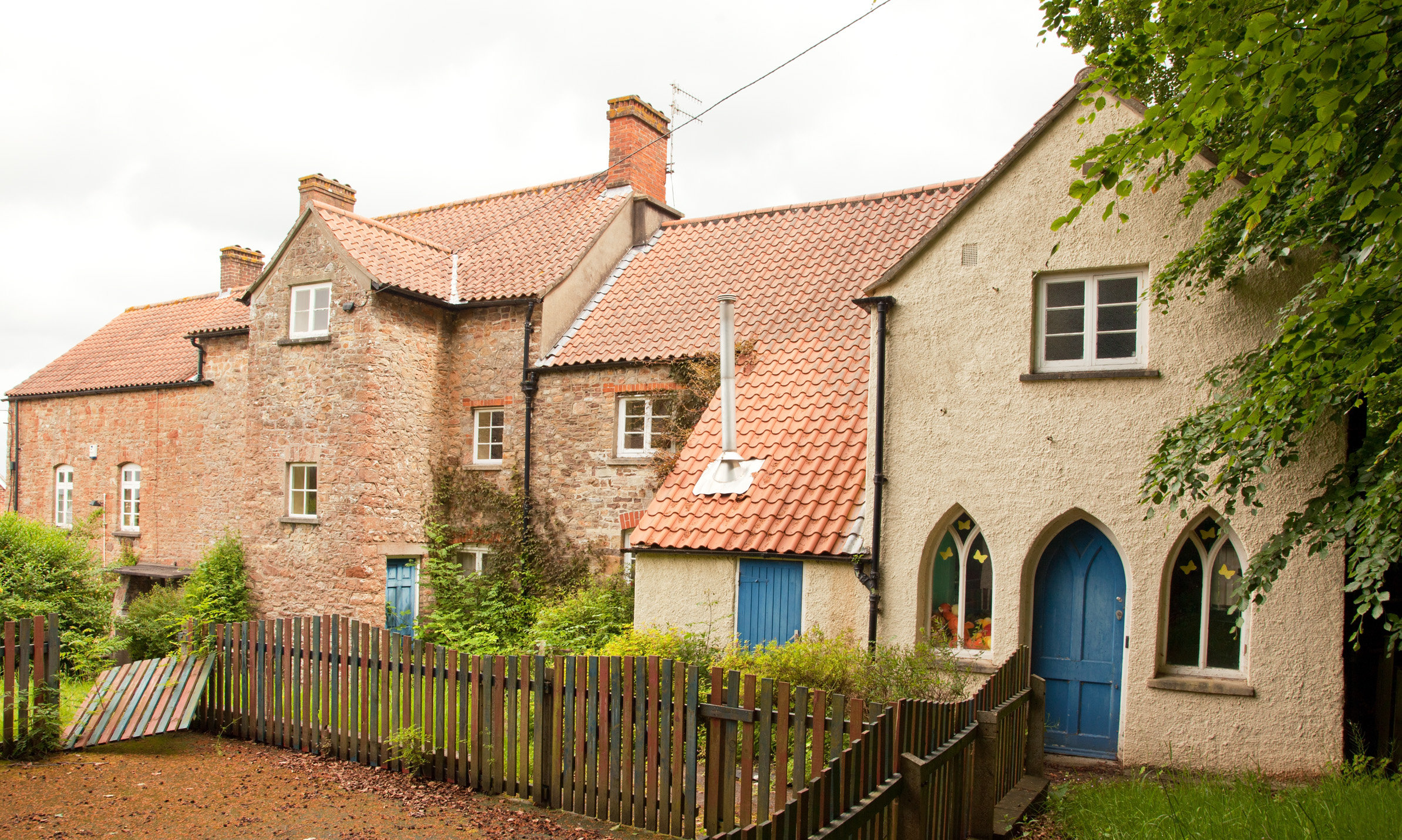 The rear, west elevation showing the ornamental Gothick facade incorporated on the right.

It is in the south wing that the recent ‘discovery’ was made, though at the rear of the building, not the public front. It was this, the west side, that fell within the boundary of the landscaped parkland, and we should, perhaps, not be surprised that it had additional architectural embellishment where it could be seen by the household and visitors.

Within the façade is incorporated three arch-headed openings, designed with symmetry and deliberate decorative intent; a pair of windows with y-shaped timber tracery, and a matching central door accessing a long room. A glance through the windows reveals three further openings of similar form in the north side of this room. Careful inspection of the stonework of the east elevation, to Kings Weston Lane, identified both a series of strong stone quoins on the corner, stretching up only the ground floor height, and a clear break in the stonework. 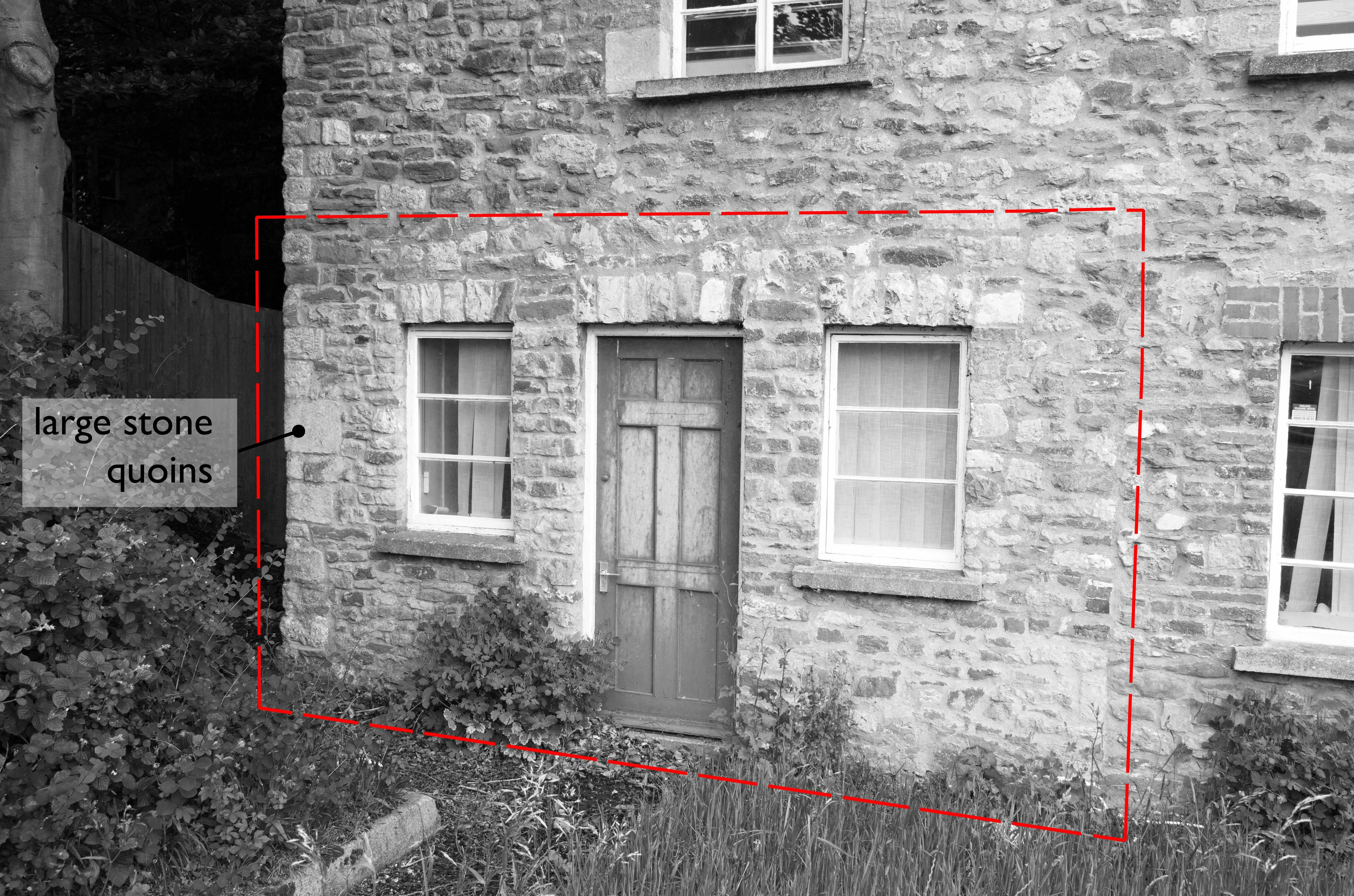 Detail of the east front showing extent of earlier structure

The implication of these finds is that, when first completed the building was a long single-storey structure with some ornament function. This was later incorporated within the farm house building, with a connecting wing at ground floor level and an entirely new first floor and roof.

So what purpose could this building have performed? Sadly there is no definite documentary evidence that we can turn to answer the question, though there are hints in an estate plan of 1772. At this time it is clear that, as part of the pleasure grounds, a walk was laid out along the eastern edge of the landscaped parkland linking Kings Weston House with the menagerie. This walk is depicted as being heavily planted and meanders downhill where it pauses at the south wind of Home Farm before continuing onwards to the open paddocks of the Menagerie just to the north; it clearly had some interest to visitors to the park to have been included on this route. 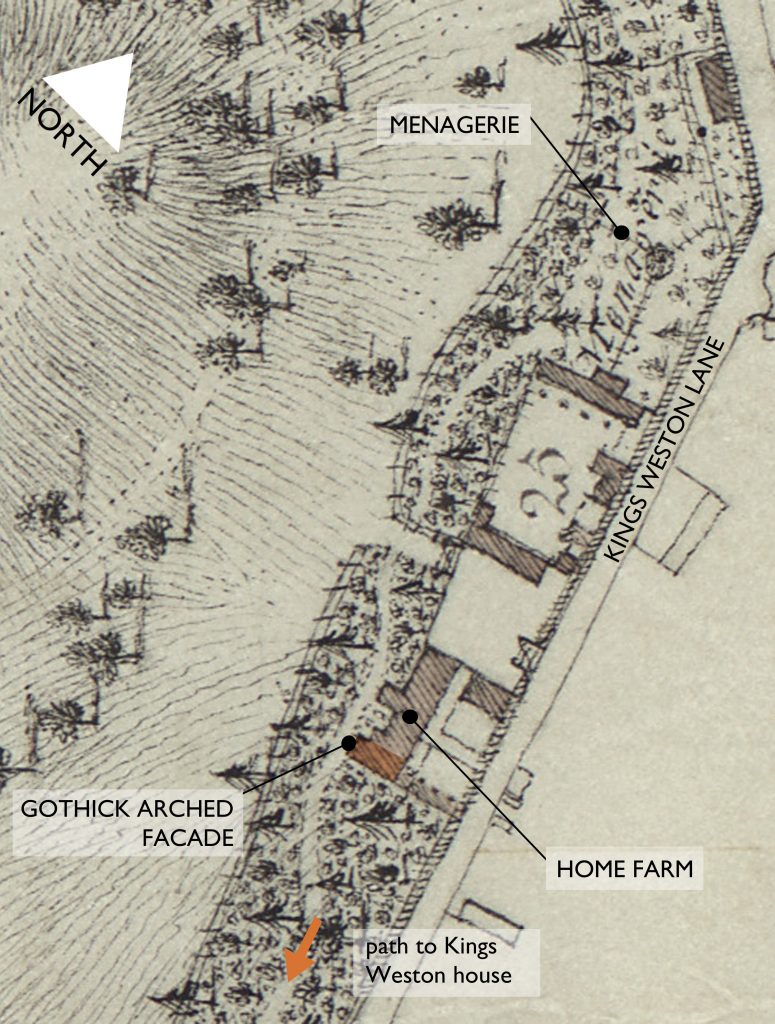 Already by 1772 the plan shows that the structure had become part of the long range of buildings we see today. Conceivably the pointed arches could date to the 1750s or 1760s when such “Gothick” follies were fashionable; indeed the fanciful tower at Blaise Castle dates from this period. There is the possibility that, when it was drawn in 1772, the buildings had only recently been amalgamated.

Its location, as part of the farm, and ornamental appearance might suggest that this building formed a dairy. Dairies often presented fashionable diversions for the wealthy, and there are notable examples of very ornate structures being attractions at country estates; our most notable local example being at Blaise where a rustic, thatched, dairy was built in the gardens in close proximity to the mansion house at a slightly later period. An alternative possibility is that it was part of the menagerie buildings, though the majority of those seem to be focussed north of the farm house.

The roof form of the building has been altered in recent times, a hipped end once fronted the parkland, and the interiors modified for health centre use, but a more detailed  inspection  of the whole range of Home Farm buildings would be a worthwhile, and potentially fruitful exploration to try and uncover its contribution to the Kings Weston estate. 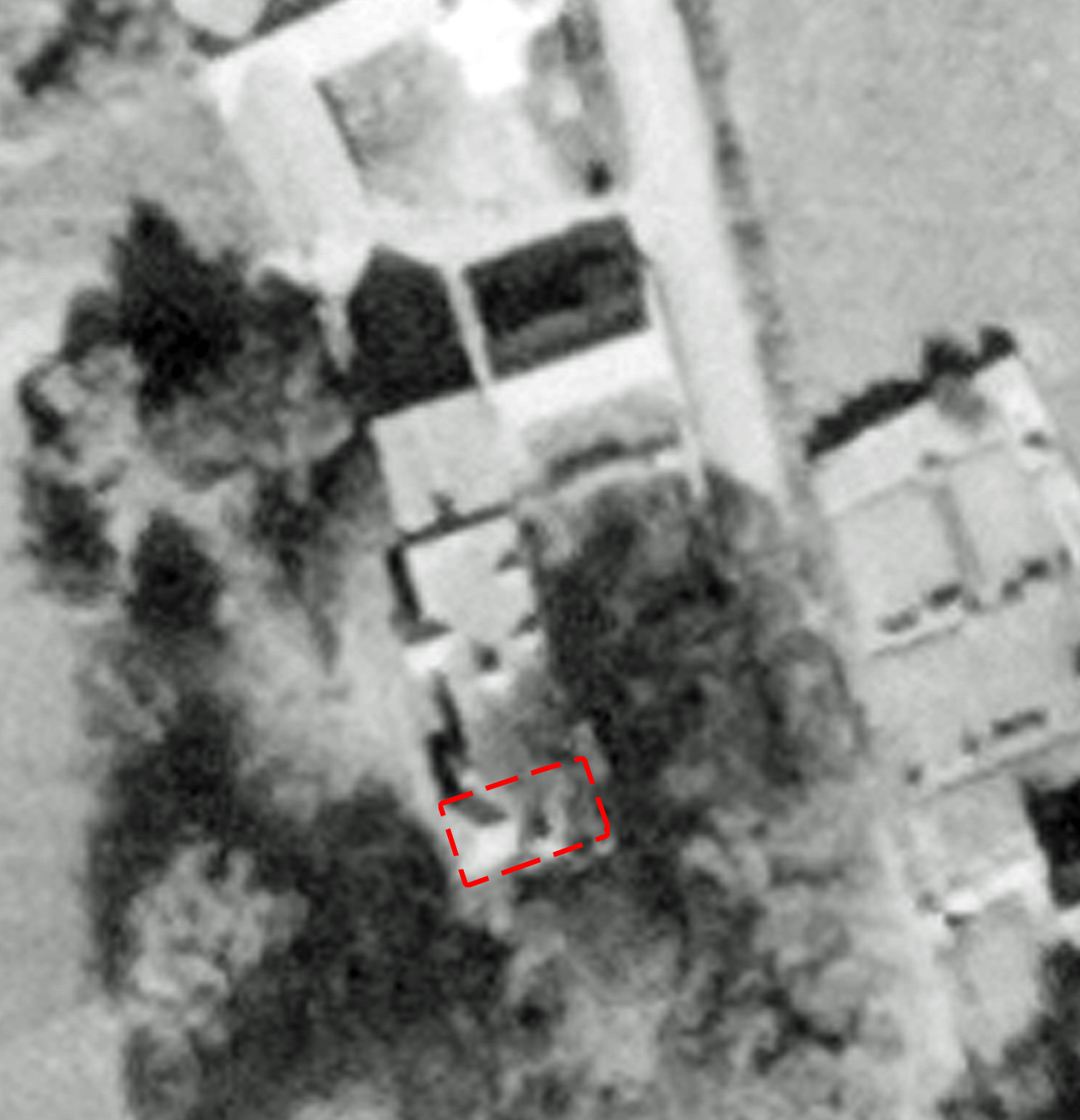