The early history of Kings Weston is not well documented,but, as its name suggests was in the ownership of the crown before being granted to the powerful lords of Berkeley. It took on a new life in the Elizabethan era when it became the estate of one of Queen Elizabeth’s Vice-admirals who fought the Spanish Armada. 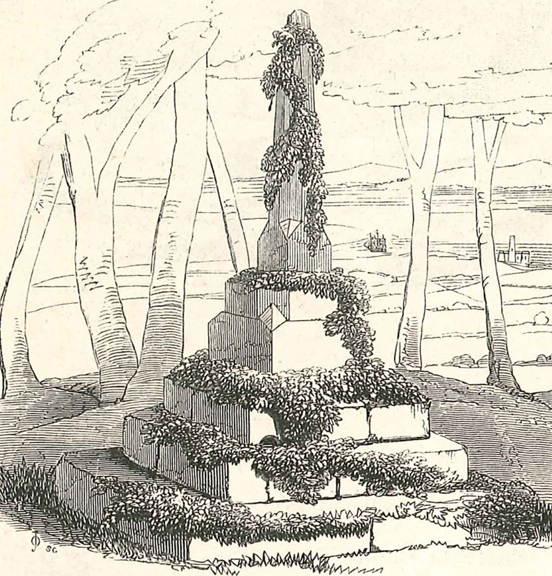 The remains of the medieval Bewy’s Cross seen here in the ‘view garden’ and before being moved to its present location in the 1950s.

Kings Weston was the ancient property of the crown, but by after the Norman Conquest King Henry II granted it to the to the Berkeley Family of Gloucestershire. It formed the most western part of the Berkeley Hundred and the name Kings Weston, or Kingsweston is derived from this legacy of ownership. It is not known if a manor house existed at this time but a chapel existed and it may have been the ruins of this that were uncovered a few years before 1868 by workmen digging just on the north side of Kings Weston Lane.

The medieval Bewy’s Cross that is now relocated on the other side of the fishpond by the stables is another remnant from the Middle Ages, but its original location was probably on the waters edge of the Severn where it is thought a seaman’s cross was located. This was moved to the ‘view garden’ at Kings Weston before being rebuilt again on its present site in 1954. 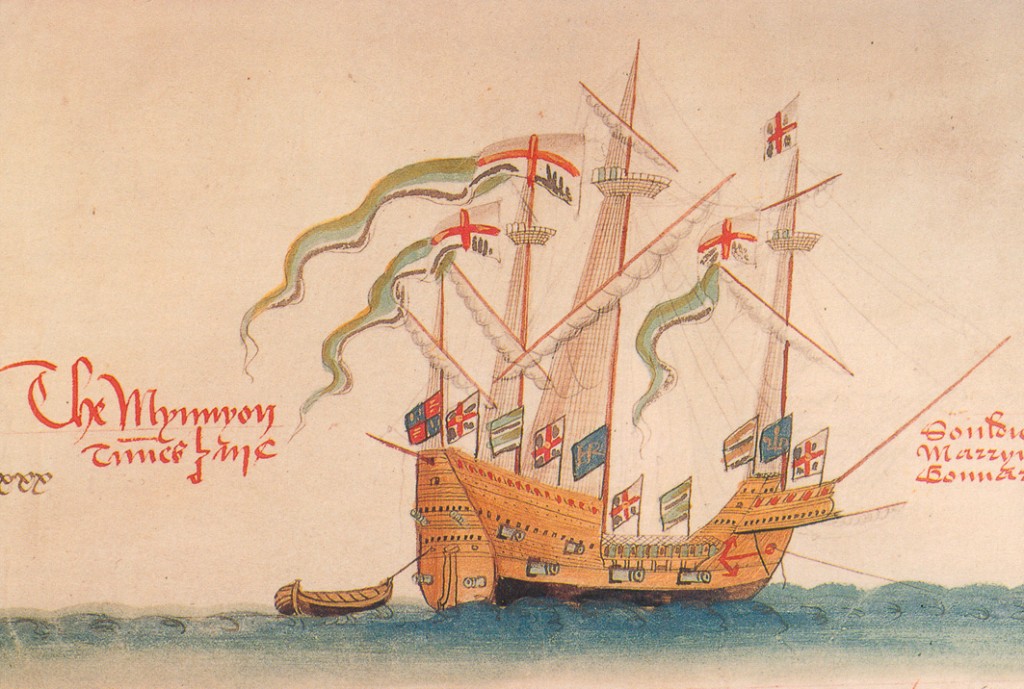 An illustration of Sir William’s ship The Mynnyon

The estate stayed in Berkeley hands until 1570 when it was sold to Sir William Wynter (also Winter/Wyntour). Sir William was a significant figure in the court of Queen Elizabeth. He was born in Bristol in about 1528 to John Wynter a merchant and sea captain. He took to the sea like his father and was schooled in the Royal Navy.

By the 1540s he was serving on a number of expeditions and in 1549 was appointed Surveyor of the Navy. He captained the ship the Mynnyon that captured a French ship and was richly rewarded. He continued in service guarding against French landings in Scotland and built himself a good reputation and a large fortune. He was appointed Vice-Admiral of England, the second most powerful position in the Royal Navy and was succeeded in it by Sir Francis Drake.Sir William was knighted by the Queen in 1573 and was pivotal in the repelling of the Spanish Armada in 1588. 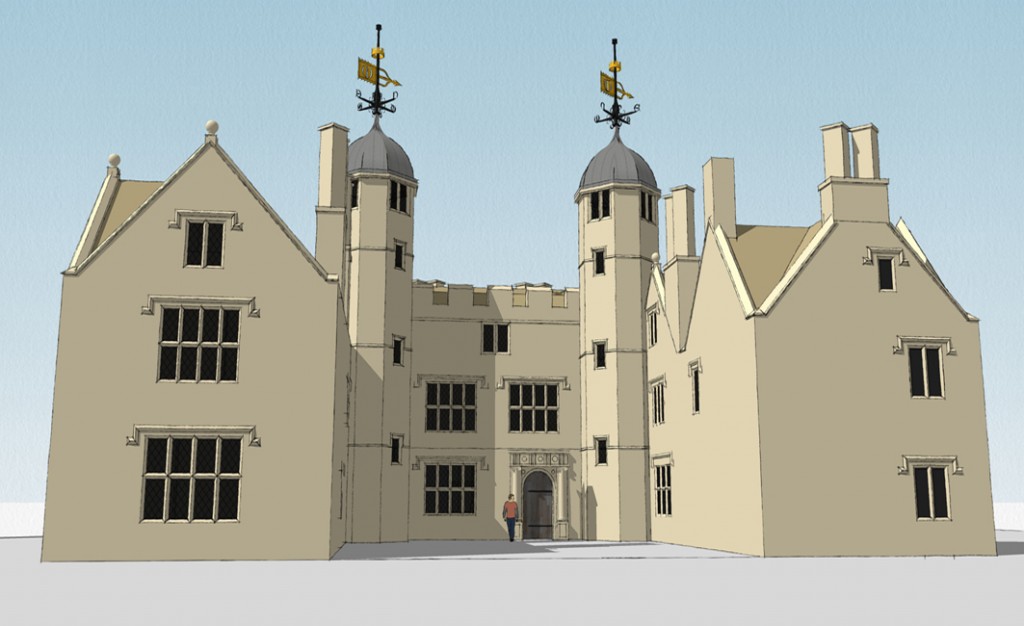 A reconstruction of the Elizabethan mansion at Kings Weston.
(Kings Weston Action Group)

In 1561 William purchased the manor of Lydney in Gloucestershire on the north side of the Severn and rebuilt the house there. He accumulated other Gloucestershire lands and in 1570 bought the Kings Weston estate. Although we have little evidence it is likely that it was William who built the substantial new mansion on the present site with spectacular views overlooking shipping approaching Bristol from the King Road.

From later images of the house before it was rebuilt we can tell it was a relatively small, but impressive late Tudor building. It was a ‘u-shaped’ building arranged around a courtyard with a pair of tall viewing turrets in its corners – ideal to overlook ships in the Severn below. The central range was castellated to make it more imposing and tall chimneys added to the sense of height. 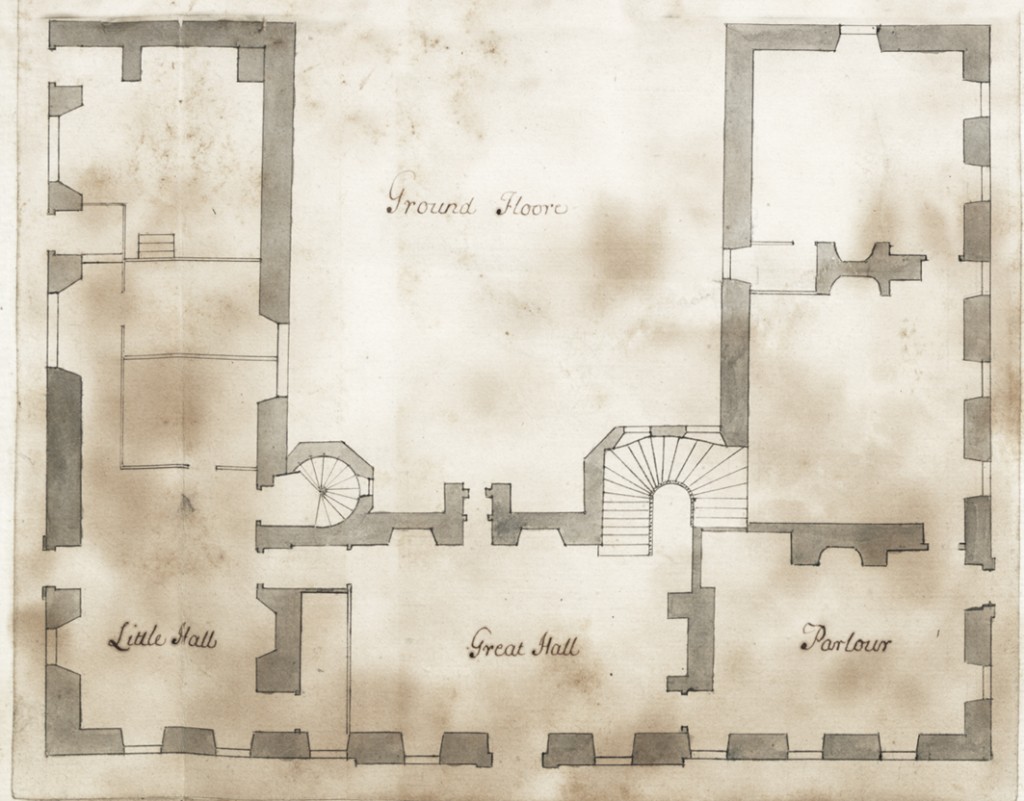 The ground floor plan of Kings Weston house before it was rebuilt in 1712. (Bristol Record Office)

A plan exists of the old manor before it was rebuilt in 1712 and it shows the building focused on a great hall with a service wing and kitchen on the more exposed northern side and a parlour and reception rooms to the south side, probably overlooking a garden. We know very little about the landscape around the house at this time, though Penpole Wood was probably long-established, and Penpole Point was established Common Land.

The estate remained in the hands of the Wynter family and they continued to improve their property there. In 1616 they were granted a license to impart the estate and stock deer, rabbits and partridge. However in about 1640 they sold the estate on to Humphry Hooke, then a wealthy merchant  of Bristol. Hooke was one-time mayor of Bristol, but when he died in 1658 his fortune was greatly diminished and his executors had difficulty in paying his considerable debts.

The compass dial on Penpole Point 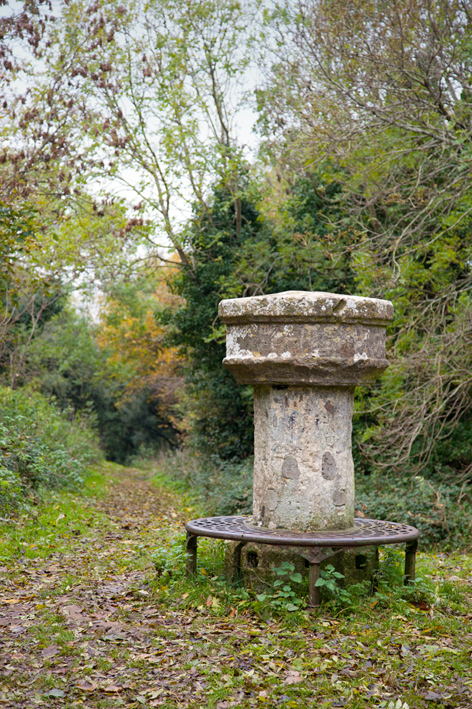 The Seventeenth Century Compass Dial on Penpole Point. One of the small sundials carved into the side of the dial can be seen as a ‘chip’ in the top in this photo. (kings Weston Action Group)

One of the oldest original features of the Kings Weston Estate today is a very unusual stone pillar located on Penpole Point. This is often called the sundial, but should properly be known as the compass. It was built here by the Society of Merchant Venturers of Bristol. We know it must have been old by 1668 when the account books of the society record the sum of £5, a reasonably large sum of money at the time, being paid to the “repairing of the compasse on Penpole Hill”. The remainder of the bill was to be paid by Humphrey Hooke of Kings Weston House.

The dial is a mushroom-shaped octagonal stone column with a circular seat at its base. This was originally a larger timber platform and it was designed to stand upon. The top surface rises slightly to a central point and if you stand on the bench and look carefully you will see it is carved with a star-burst compass shape. Looking harder you will find that the north side of the compass is embellished with a fleur-de-lis. Although the compass is not actually a ‘sundial’ it does have rudimentary sundials added to it. On the east and west sides of the top there are deeply carved concave holes. These were used as ‘scaphe’ dials where the shadow falling on the curved inner surface could have been used to tell the hour of the day.

Before the trees grew up the dial would have stood proud on the horizon above the ships arriving at the mouth of the Avon below. It was used as a seamark to assist sailors in taking the safest heading in order to enter a sharp bend where the river met the Severn. Ships could sometimes be held up  in the King Road, the safe stretch of water in the lee of Portishead, for weeks before the tide and winds were right to attempt the treacherous journey up the Avon to the city docks. The compass may also have been used by the Merchant Venturers as a monitoring station from where their servants could take basic information on newly arrived ships, where they were moored, and the time that they arrived so that the news could be sent back to waiting merchants in advance of the ships arrival.