With the acoustic feature partially restored it’s worth reassessing the parkland building that took its name. The Echo was designed by Sir John Vanbrugh, the same architect as Kings Weston house, and was probably erected when the parkland was being embellished in the 1720s. It was fitted into a pre-existing series of formal gardens that led up the hillside from the house. These three walled gardens followed a typical arrangement of parterre garden, ‘wilderness’ garden, and grove, that became popular in the Seventeenth Century. At Kings Weston these gardens were to have been likely laid-out by Sir Robert Southwell and designed to related to the earlier Tudor mansion. They were retained, partly remodelled, when the old house was demolished and the present one begun in 1712.

The early gardens are shown in several engravings, but the most complete is an estate plan of 1720. This may have been commissioned immediately ahead of the park being embellished, and doesn’t yet show the Echo in its current location. Instead, in the location the axial route through the Grove terminates in a canted wall, perhaps with a raised viewing terrace where the view back towards the house could be enjoyed. 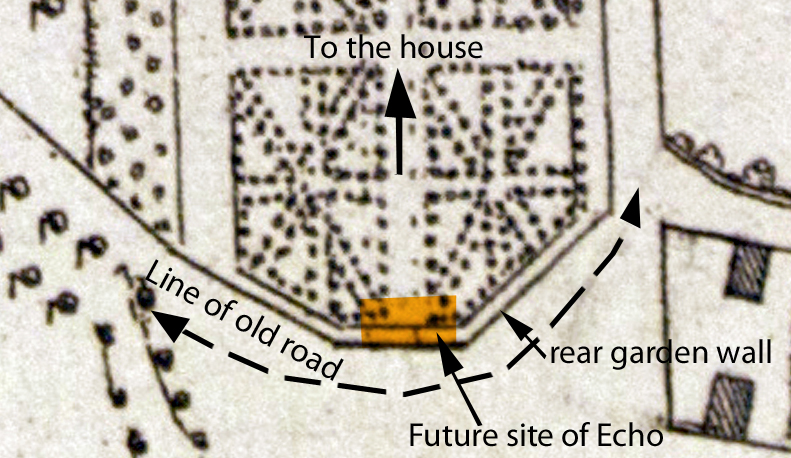 The blank sides and rear of the present Echo building has often perplexed visitors. Why would a garden structure that could, at the time, have been seen from all sides make no effort with ornamentation? The answer has been revealed through recent research. A drawing exists in Bristol Record Office  which shows the slope of the landscape from the garden front of the house along the garden axis. Dated 1720 it’s is a measured survey produced ahead of proposed alterations to the height of Kingsweston Hill, and, although it doesn’t show the Echo, passes through its future location. Measuring carefully the distance from the house the location can be plotted on the historic drawing. What it shows is that at this time there existed a public road passing around the back of the private gardens.

Whilst it’s not possible to find traces of the road today – it’s long been erased by works designed to obliterate it – it illustrates why there was never any necessity to ornament the rear of the Echo at this time. The public’s experience of this side of the gardens was only of a high boundary wall intended to keep the inquisitive at bay. When the Echo was built it too turned its back on the public highway.

How long the road, and the garden wall, remained is not known; They were swept away before 1772 when the Echo is first shown as a stand-along building. It is likely that the road was moved and landscape altered in the 1730s when records suggest part of the hill here was being taken down. This was a major undertaking designed to improve the view from the house towards the city across Shirehampton Park, and a public road would have been a substantial inconvenience to ambitions. 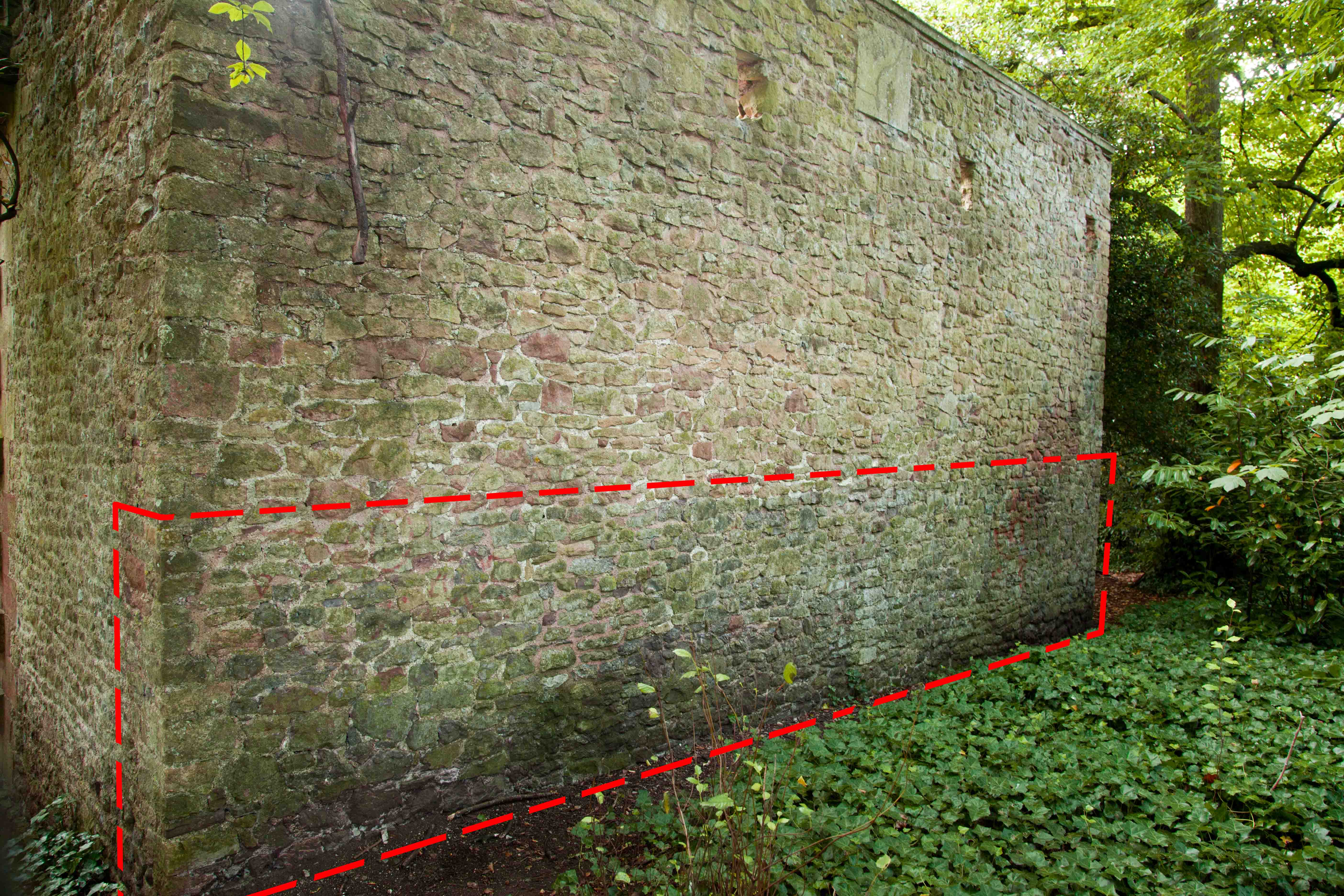 The early wall fabric preserved in the rear of the Echo

What we are left with in the Echo bears closer inspection. Looking carefully at the stonework there are clear scars in the fabric. Whilst it’s known that some of these date from substantial restoration works in the 1990s there remain earlier traces. Across the rear wall of the echo, on the front and rear facades, there is a definite change in colour and texture in the stonework. The lower section is of paler limestone, whilst the upper section matches the sides of the building and are of a pinkish Penpole Stone. This is the fossilised remnant of the original garden wall that were incorporated into the Echo when it was built in about 1724. The alcoves inside the Echo have been inserted within the thicker fabric of this boundary wall, and the arches spring just above the line of the original wall.

Although no other built trace remains of the formal garden structure (even the current axial path is a Victorian) we are fortunate that, if we look closely, we can still discover traces of the landscape’s past in even in it most familiar features. 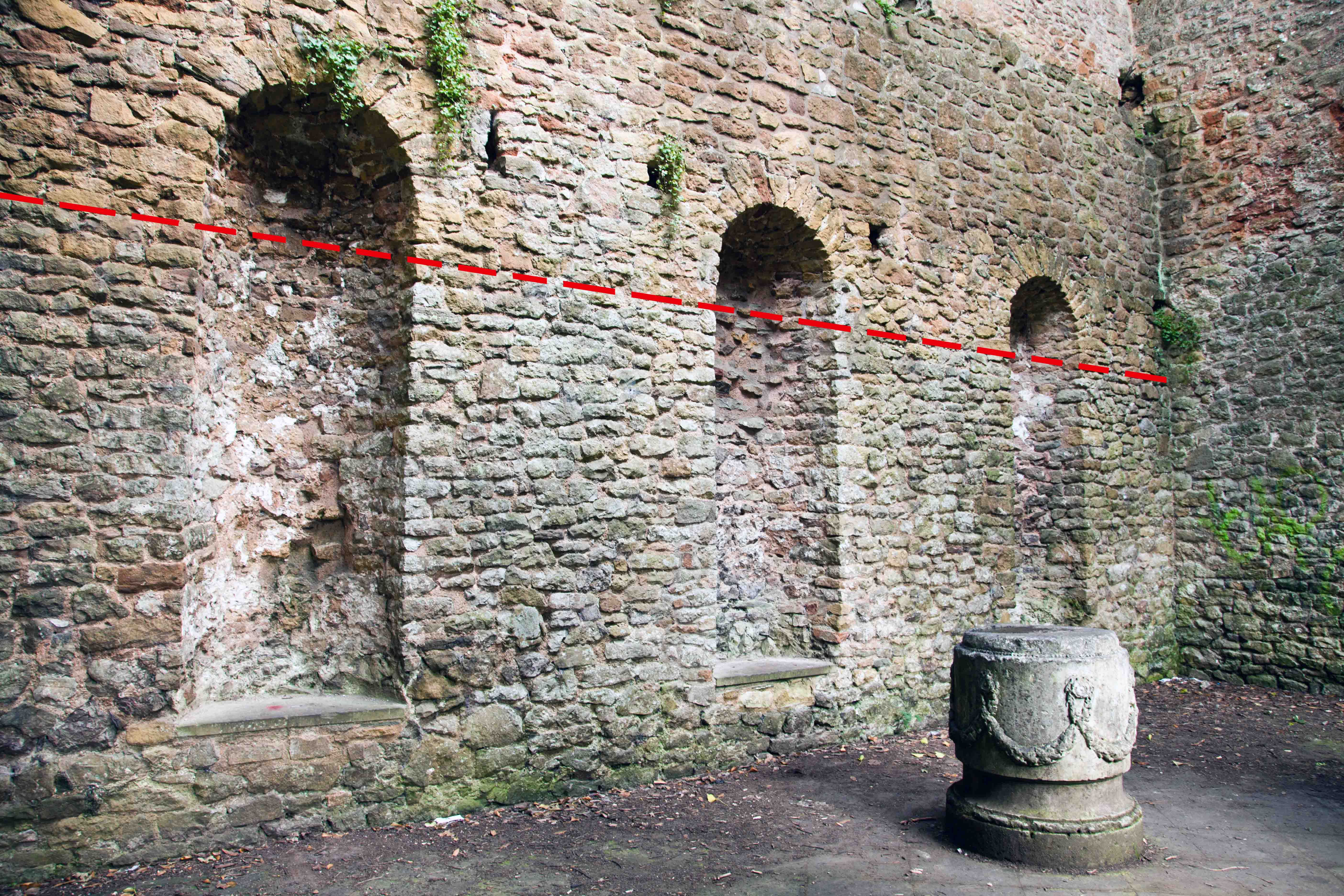 The back wall of the Echo showing the change in stonework from grey below the line, to pink above it.