Join us on a walking tour of the historic Kings Weston estate.
SATURDAY, MAY 3rd, 2014
Starting at 10:30 from Shirehampton Road public car park

The walk will take in many familiar, and less well known parts of the landscaped parkland offering new insights into the history of the house and estate based on the Kings Weston Action Group’s newest discoveries. Discover the story behind the Scouts’ Chapel, find out about famous visitors, and uncover the ruins of lost monuments. David Martyn of KWAG will guide you through four Centuries of the history of Kings Weston, shedding light on the people that created it and the legacy they left.History Walking Tour 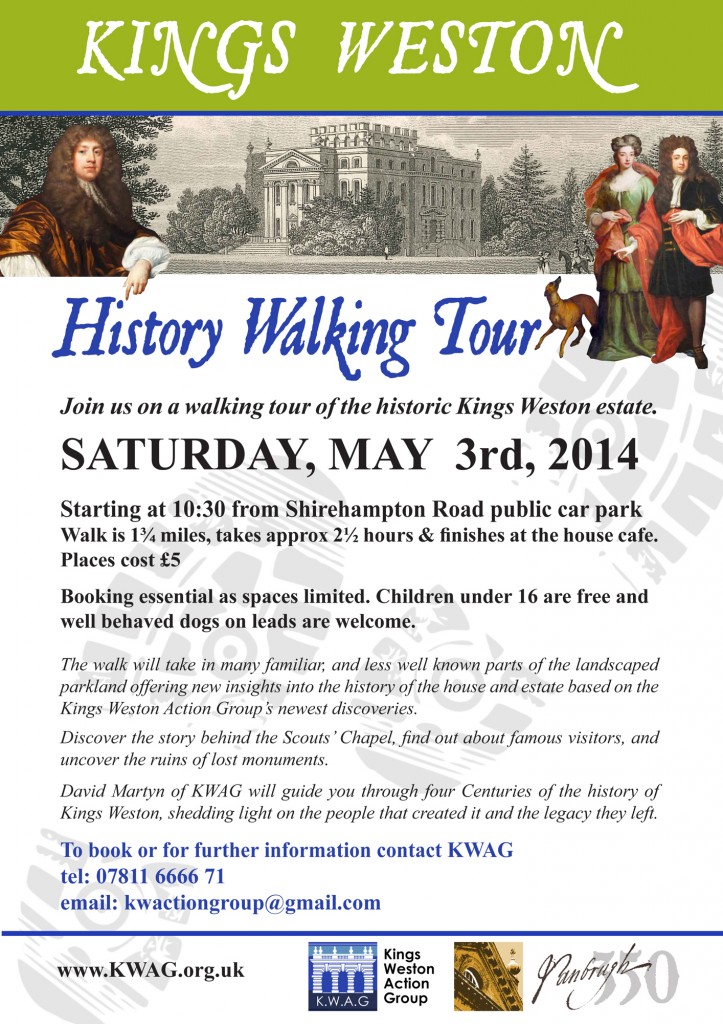 Following our three-month attack on the brambles and undergrowth at Penpole Point we are moving our attention to an easier spot this month. We will be running our working party THIS SATURDAY starting at 10am from Shirehampton Road car park and tackling undergrowth and self-seeded saplings along the main avenue leading towards Kings Weston House just here.

This months task will be a lot easier than recent and involve removing self-seeded saplings and undergrowth that are challenging the growth of the ancient avenue trees. Hopefully nowhere near as many brambles!

As usual we ask that volunteers make sure they are wearing suitable clothing and footwear for the event and please do come along with your own tools if you would prefer to use them. We should have a supply of tools and gloves available if you don’t have your own.  Please provide your own lunch, or feel free to come along any time during the event. If you look out for one of KWAG’s event coordinators and report when you arrive we will be wearing out KWAG polo shirts.

Hope to see you there!

A full twenty years has passed since the first attempt at a conservation strategy for the historic Kings Weston Estate in the north of Bristol. Now a new plan has been launched by Bristol City Council coinciding with the 350th anniversary of Sir John Vanbrugh, the architect behind some of the park’s most distinctive buildings.

The new Conservation Management Plan (CMP), has been produced by the city council’s Urban Design Group with match-funding from Bristol Buildings Preservation Trust (BBPT), and with major contributions made by members of the Kings Weston Action Group (KWAG).

The parkland around Grade I Listed Kings Weston house is a Registered Historic Landscape, but has lain largely neglected and poorly understood for many years. Most of the 300 acre park came into the full ownership of Bristol City Council only in 1996 with the 80 acres of the Shirehampton Park portion of the estate being owned by the National Trust. In recent years the council, BBPT and latterly the volunteer Kings Weston Action Group have been working closely together to promote, conserve and enhance it.

The new CMP is a colourful and detailed document that sheds new light on the history and importance of Kings Weston as, perhaps, Bristol’s most important historic landscape, though it’s main aim is to detail ambitious new aspirations for its future conservation. The park contains at least five buildings designed by Sir John Vanbrugh, one of the greatest architects of the Eighteenth Century, most famous for Blenheim Palace and Castle Howard. 2014 marks the 350th anniversary of his birth and Bristol can lay claim to one of the most significant collections of his buildings in the country.

Councillor Gus Hoyt, Assistant Mayor with responsibility for Environment and Neighbourhood Partnerships, said: “This document is an important piece of work, the result of a great deal of work by officers, multiple council administrations, the Bristol Buildings Preservation Trust and volunteers.  It is a credit to all sides, and a plan which makes clear the historic and architectural importance to Bristol of this area.

“Bristol City Council, which has supported the creation of the plan, is keen to continue to work with the action group to support their efforts to gain funding in order support future conservation work.”

David Martyn, Chairman of the Kings Weston Action Group said: “We’re delighted that this new plan is complete. It’s the road-map for the future we’ve been waiting for, and it’s now our aim to work with the City to seek out funding and come up with a plan to realise the aspirations.

“This is a major landmark for Kings Weston, but we hope it’s just the beginning of bigger things. We’re indebted to the City and Bristol Buildings Preservation Trust for having commissioned it, and this anniversary year couldn’t have been a better time to launch it.”

Councillor Anthony Negus is Chair of the Bristol Buildings Preservation Trust and as a former council Executive Member worked to kick-start and secure funding for the project.  He said: “As a former conservation architect I am acutely aware of the importance of this estate, which is undoubtedly one of the finest in the country.  In all my years I have never seen such a high quality and detailed Conservation Management Plan, and I am very thankful to everyone who put their time and efforts in to it, particularly the dedicated staff of the council’s conservation and estates teams.

“I am very proud to have worked on the project from the outset and to see it completed is a real joy.”

KWAG shared all of its own research with the City Council, much of which has now been incorporated in the CMP, and offered continuous advice, community consultation, and feedback since the plan was commissioned by the council in 2011. The CMP will be available free to download from both the Bristol City Council’s and KWAG’s website for everyone to enjoy.