Over the last twelve months plans have been in development for the gardens and car park immediately around Kings Weston house. Proposals are now sufficiently developed to go out for public comment ahead of planning applications being lodged for the works. If you are a regular reader of our newsletters you will be aware of the on-going felling of trees and the removal of the ruins of QEH school. These works have been informed by the gradually developing plans that Norman Routledge at Kings Weston house and his architect and landscape designer have been working on. Through our regular steering group meetings with Kings Weston house and Bristol City Council, and with input from Avon Gardens Trust, the proposals have evolved and are presented here for your feedback and comments.
In summary there are two drawings here for consideration; The coloured drawing shows the masterplan for the area and has been drawn-up by Quentin Alder architects, and the second plan is a detailed proposal for the first phase of works including planting and detailed layout drawn up by Al Smart landscapes.

One of the key premises of the proposals is to maintain public enjoyment of the area around the house and we have wholeheartedly supported that aspiration by Norman. The other consideration needs to be ensuring the continued viable use of the house and grounds to secure the long-term future of the historic property. Proposals include for enhanced car parking in the current area with a small extension into the land formerly lost to the ruins. 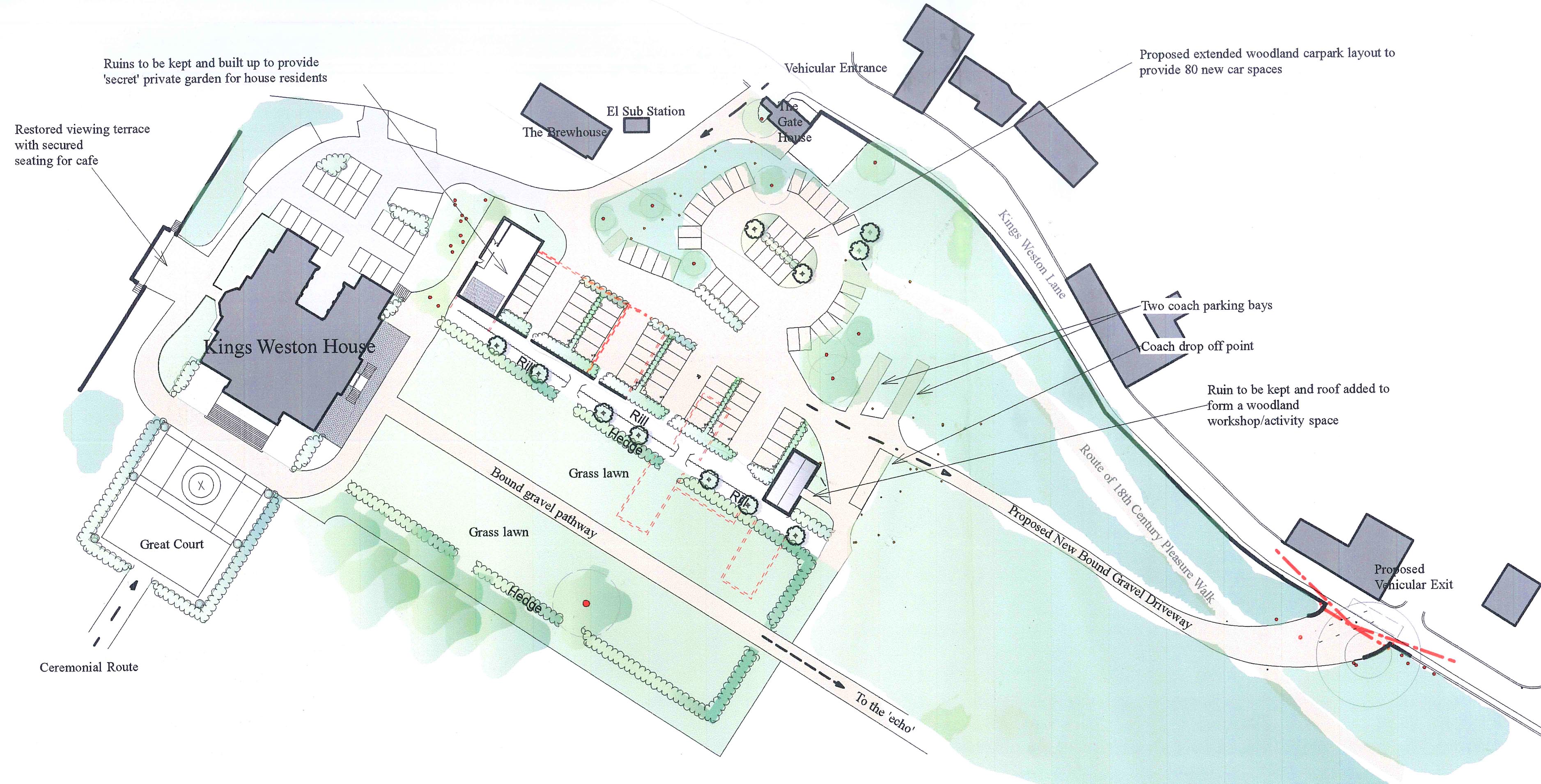 A new single-lane exit track is proposed to pass from the existing car park onto Kings Weston Lane to provide a safer vehicle exit from the grounds than is currently possible at the blind junction opposite Napier Miles Road. This would travel through the woodland area, towards the Echo, but be distinct from the main axial path, or the historic pleasure walk that passes close to the park wall. An existing opening in the wall would be re-used without further damage to the boundary. Proposals for the coffee shop terrace balustrade, the Great Court area, and improving the drainage and hard surfaces close to the house are also part of the wider scheme.

The detailed proposals relate to the first phase of works which relate mainly to the proposed landscaping and planting scheme. This currently does not include the expansion of the car park into the woodland area, or the new exit route. Many trees will be retained, and these will be complemented with more ornamental species. The car park will be linked to the main lawn by new paths crossing the current trench through the site and pleached lime trees and lower planting will create a buffer, concealing the car park from the gardens. 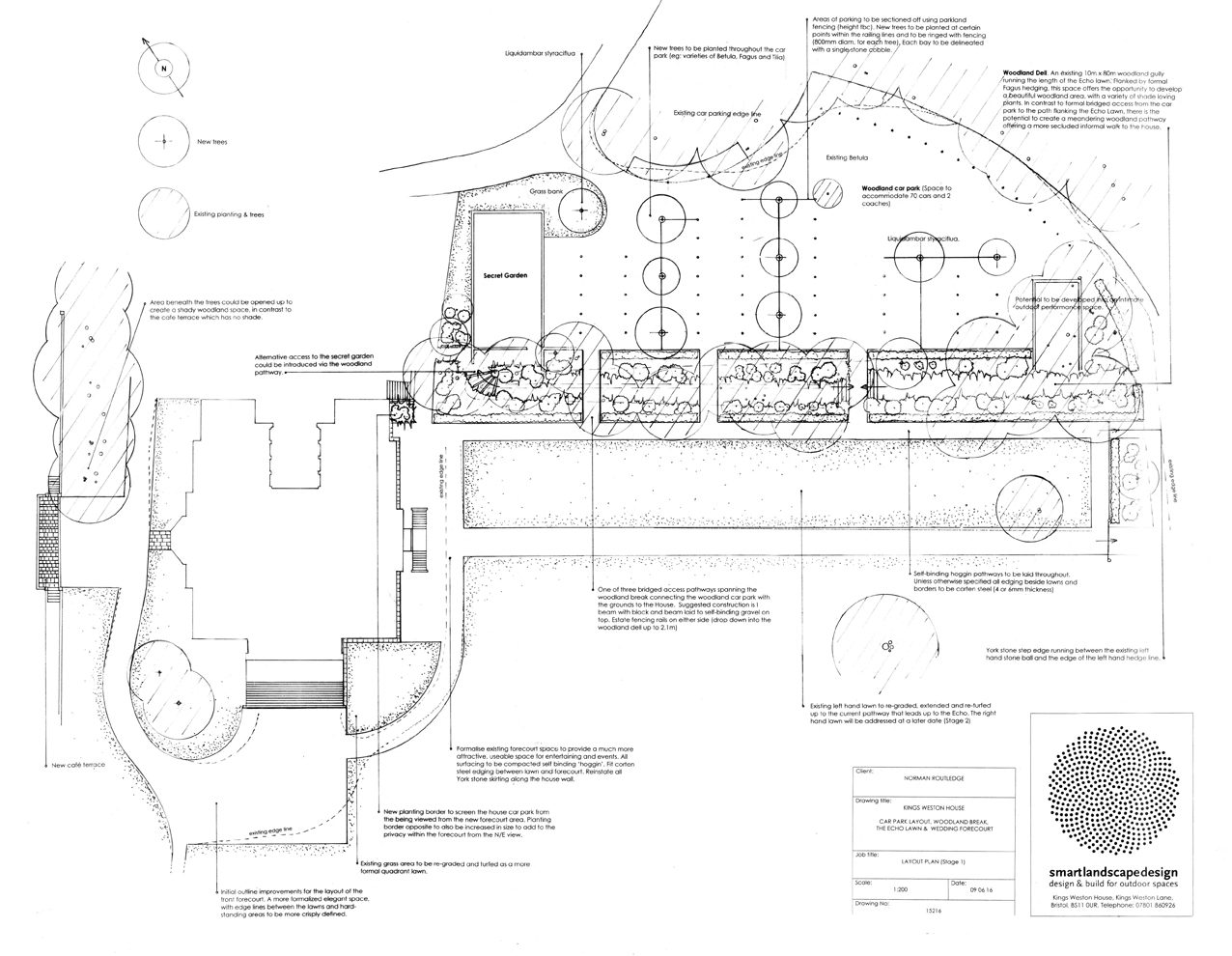 It is intended that a design competition be launched that will invite ideas for how the Great Court at the main front of the house could be recreated in some fashion. This idea is being developed with the support  of Bristol City Council and Norman Routledge and we will keep you abreast of how this develops.
We would very much like to hear your thoughts on the proposals. If you could get in touch with us by email or other means we’d like to collate them into a coordinated response from KWAG. If you are keen for your comments to be included we would be extremely grateful if you could get them to us by Monday 12th September. The proposed drawings can be seen here, or downloaded as two PDF documents here, and here.