As well as uncovering the historic glasshouse wall KWAG’s recent clearance efforts uncovered a fascinating new fragment of the estates history. The discovery of a decorative cut stone fragment, still built into the wall, raises questions about where it came from. 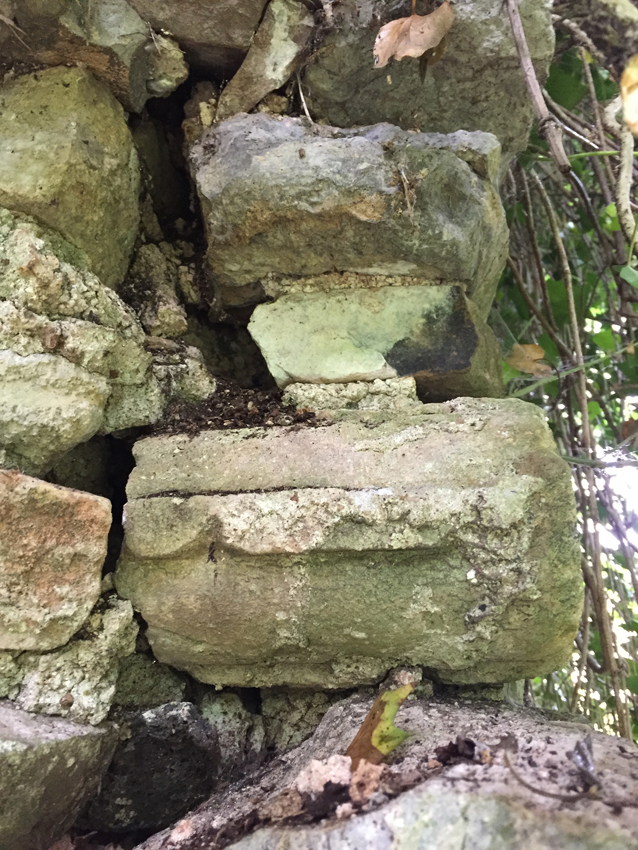 The stone fragment in-situ in the glasshouse wall

The stone is not in its original location; it’s built into the wall at about eight feet off ground level and with its carved mouldings formerly hidden within the fabric of the wall. This carved surface has now been revealed through the gradual collapse of the wall to the north of it. It measures approximately 7” x 7” x 4” and the stone is not from any of the quarries of the Kings Weston Estate. Instead it’s of the much finer oolitic limestone from quarries at Dundry or perhaps Bath. This finer grade of stone was frequently used for its easily worked qualities on ornamental work.

There are only two faces visible in the present location. The most diagnostic face has ovolo mouldings along its narrowest edge and is clearly set on its side so that its plainer face would have formed a flat surface within the glasshouse, with the ornamental parts deliberately obscured within the wall fabric. 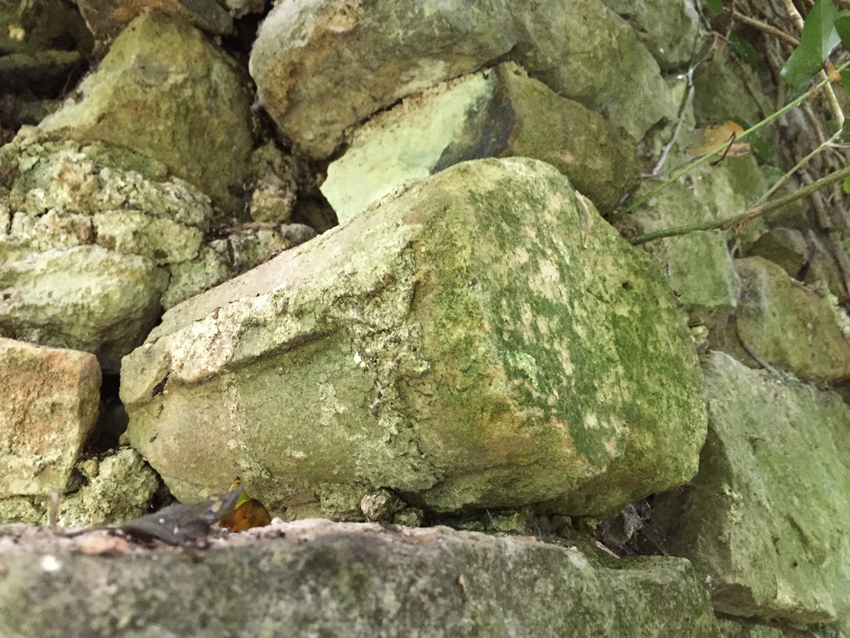 By 1712, when the rebuilding of Kings Weston house and estate buildings were begun, mullion windows would have been anachronistic and ovolo mouldings replaced by new classical details. The mullion is likely to date from a period between the late-Sixteenth to the late-Seventeenth Century, but to be more precise is difficult. It is undoubted that the stone forms part of a window mullion, but from where, and under what circumstances did it end up in its current location? 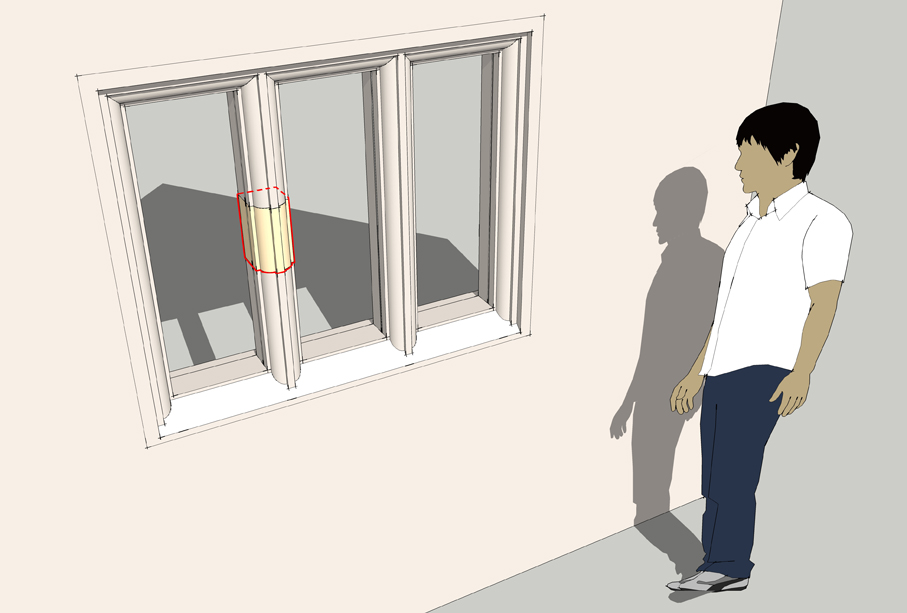 Reconstruction of the stone fragment in the sort of context it was originally designed for.

From estate plans we can date the wall in which it presently resides to about 1770. This was towards the end of a period of major upheaval on the estate, when Edward Southwell III was, once again, remodelling and renewing Kings Weston house and its gardens and service buildings to a grand and new coordinated plan. The stables and walled gardens around the glasshouse are the most substantial evidence of that programme of development.

Southwell sought to lay out the new walled complex to accommodate all the services and kitchen gardens he was removing from their original locations. Originally densely massed around the rear of the house many structures would have pre-dated the mansion designed by Sir John Vanbrugh. Early engravings and estate plans show a series of low-rise structures arrayed around yards, no doubt swept away to expand the ornamental parkland setting. 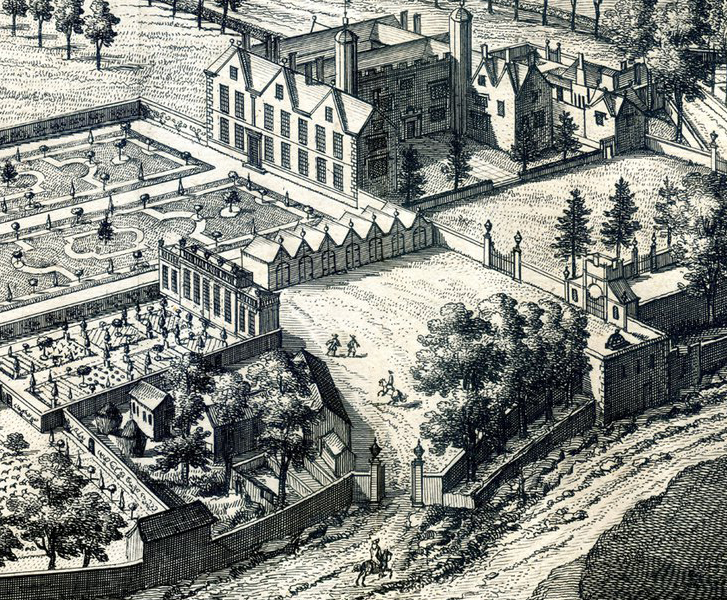 The service buildings behind Kings Weston house in about 1710

So with this level of upheaval could the stone have come from one of these out-buildings on the other side of Kings Weston Lane? It is certainly a possibility that the rubble was salvaged and reused in new structures. It would be logical that the glasshouse, an ornamental building built for leisure rather than utility, would have followed the more important kitchen gardens and service blocks which needed to be complete before the old buildings across the lane could be decommissioned. It could then have been erected at a time when the old buildings were being dismantled and material transported the short distance across the lane for reuse.

However, there remain a couple of other possibilities. Although the late Tudor mansion that preceded the current house was demolished sixty years previously it is not inconceivable that material from it was still scattered about and scavenged for new building work, but perhaps the strongest argument can be made for it having been salvaged from buildings closer at hand.

Close to the site of the glasshouse we know that there were at least three properties in existence in 1720 each within its own plot(marked 1-3 on the plan). From a closely contemporary engraving we get a sense that these were good sized buildings, each of two storeys. Building 3 lay almost exactly on the site of the glasshouse, and all of these structures had been erased by the time the walled gardens were begun. There is a strong possibility that fabric could have been reutilised in the new works. 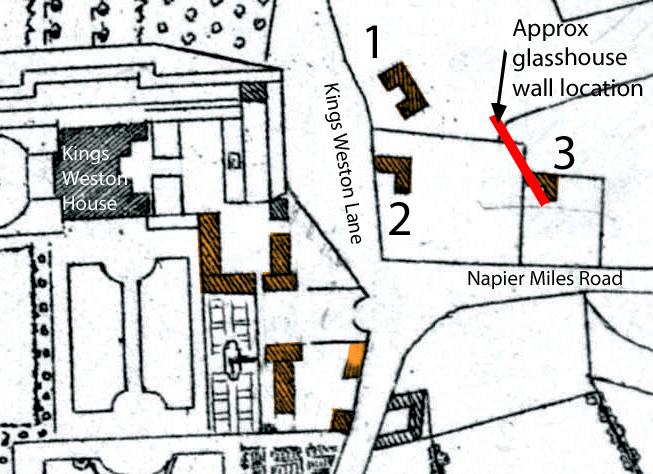 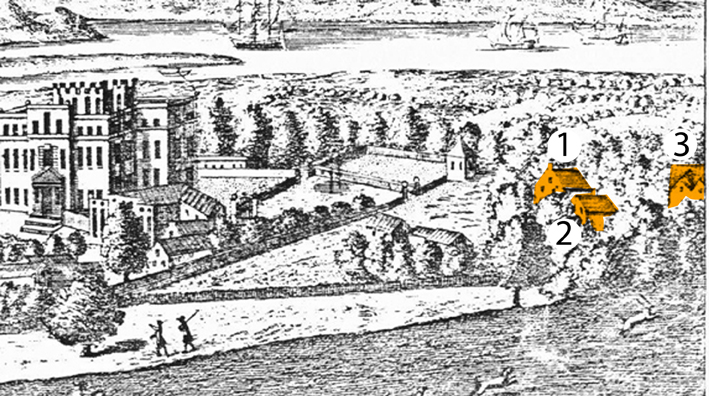 Above: The 1720 estate plan and a near-contemporary engraving showing the buildings demolished for the walled gardens and stables

It is interesting to note the east-west alignment of building 2 on the plan and there is speculation that this structure may have incorporated the medieval chapel of St Thomas that was associated with the earlier manor. Sadly there’s been no recent identification of any medieval material at Kings Weston and the fragment of mullion post-dater the reformation when it was, most likely, abandoned.

The quarter of the walled gardens to the west of the stables, incorporating the remains of the glasshouse wall, may hold significant archaeological interest. Perhaps, in the future, we might be able to identify more of this cluster of earlier buildings, swept away in the Eighteenth Century race for modernity.

Outside the garden front of Kings Weston house, lying almost across the main axis between house and the Echo, is a complex of overgrown brick structures long lost to the undergrowth. These ruins often provoke curiosity from visitors and, with their imminent removal, it seems a timely moment to uncover their past.  Rather than being the ruins of buildings they are in fact ruins of a building site. The walls, some standing up to ten feet, are all that remains of a grandly ambitious plan to relocate one of the City’s best knows schools to Kings Weston. 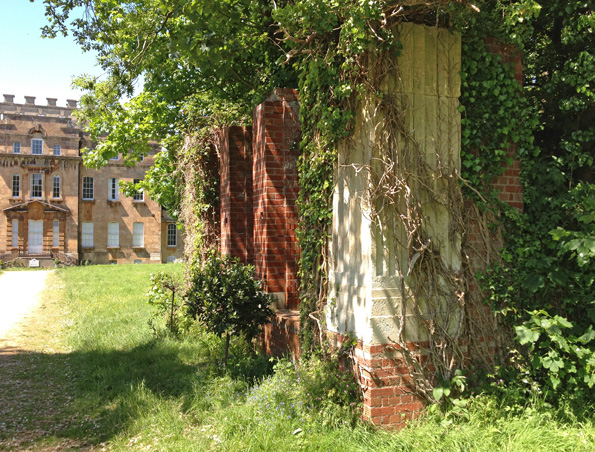 Even in the first decades of the Twentieth Century Queen Elizabeth Hospital School had a pretty formidable reputation for harsh and disciplined education. However, by the 1920s the regime was changing and, as part of a campaign of modernisation the school, better known as QEH, they were keen to shed their Victorian workhouse-style premises on Jacobs Wells Road for greener pastures. The death in 1935 of the last private owner of the house, Philip Napier Miles, gave them their opportunity and they entered into negotiations with his widow and trustees. Eventually it was agreed that Bristol Municipal Charities would purchase the grounds on behalf of the school for the discounted price of £9,800 “provided that the historic house was preserved”.

There was a short delay as funds were sought for the purpose and for the construction of new accommodation the school would need; the purchase only being completed in 1937. The Western Daily Press of July 31 that year announced “It has been stated at recent prize-giving a Queen Elizabeth’s Hospital that the Governors were looking out for a site for a new school. This has now been secured and Bristol will lose from its centre a school which has made its mark on the educational world. It is announced that the negotiations for the sale of Kings Weston House, Shirehampton, have now been concluded, and Mrs Napier Miles, the owner, has sold Kings Weston House with land, including the front park lands and Echo Walk, to the Trustees of Queen Elizabeth Hospital… Mrs Napier Miles is retaining the Kings Weston walled Vanbrugh Gardens, together with the lily pond, and other adjoining lands in which she is building a house for her own future occupation.” 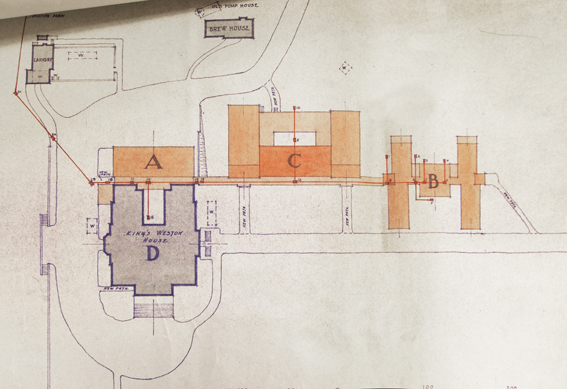 There was a further delay to the project as drawings for the new buildings were secured from the eminent London firm of architects Sir Aston Webb & Sons. The plans involved a new wing at the back of Kings Weston house replacing the former kitchens, and connecting it to two further blocks of accommodation via an open “cloister”. The new sections were to incorporate a gymnasium, refectory and kitchens in the centre (Block C), sandwiched between school rooms and library in the main house, and new dorm accommodation at the far end. The architects confidently expected the school to be ready for occupation by September 1940.

The continual delays in the project were to prove terminal. Planning approval was finally signed on the 23rd of March 1939, and although work began very quickly on site the declaration of WWII less than six months later put pay to the project, as all non-essential building work was laid aside for the war effort. The Evening Post of October 27th gloomily reported “School scheme in abeyance – Kings Weston affected by war: A paragraph in the later editions of yesterday’s Evening Post announced the cancellation of certain arrangements which involve the temporary abandonment of two important local educational schemes. As a result Queen Elizabeth Hospital School will continue to function as at present and the scheme for the proposed new secondary school at Kings Weston remains in abeyance for the time being”

Above: A recently found image of the proposals now held by QEH

Throughout the war QEH nursed their ambition to complete their project and relocate to Kings Weston when hostilities ended. The house and park were requisitioned by the army, but the half-built walls of the school were left alone. The large quantities of stonework salvaged from the old house kitchens still litter the grounds today, and the rear of the house, where the new structure was to connect, was left scarred and open, only to be quickly patched to make it temporarily watertight (a repair that’s still in service today!). Instead of an open cloister there was a deep trench along which the services were to have run. And so it remained.

In 1947 the grounds were still under requisition when Lord Methuen brought the plight of the house and school up in the House of Lords, “I am sure it would be generally agreed that there is no better way of keeping a house in good condition than by its being lived in and properly cared for under responsible ownership. That will be the case with Kings Weston when the school is able to take up its abode there.”  But rationing and restrictions on construction continued after the war and no further progress could be made. As soon as the Army had left then the Corporation took control of the house and grounds for use as a temporary junior school for the fast-developing Lawrence Weston Housing estate. QEH, with its patience and enthusiasm stretched, eventually abandoned their plans, and Bristol Municipal Charities sold the land on in 1960. 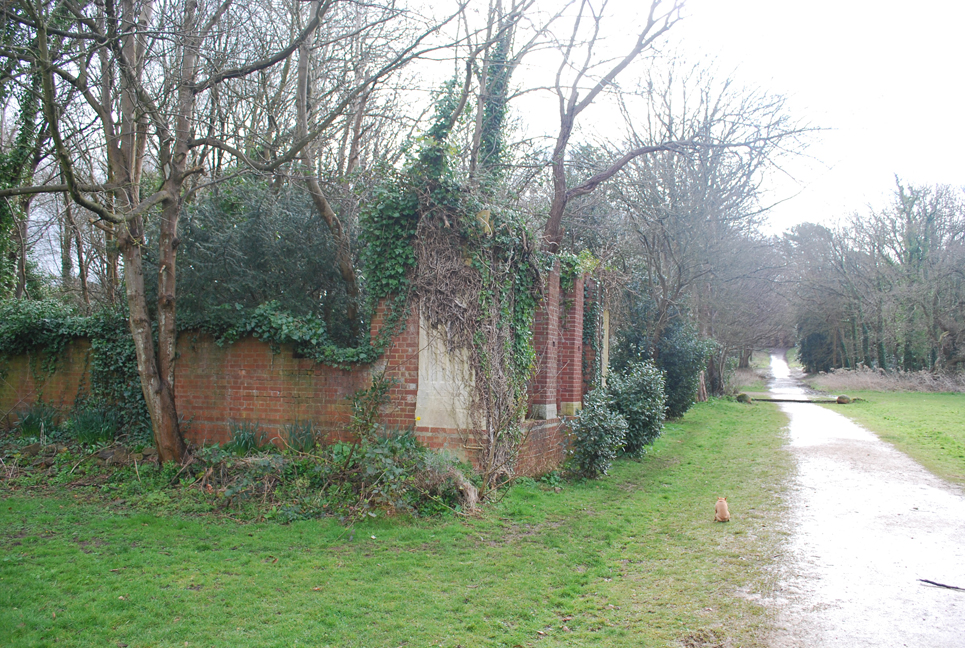 Today the ruins stand much as they were left at the outbreak of war. The walls have been upset by the roots and branches of trees, but still stand. The giant trench can still be seen, along with the Victorian detritus that was tipped into it in the hurry to close the building site down; but this is shortly to change. The Conservation Management Plan for the estate published in 2014, although recognizing the part the ruins play in the story of the house and Grounds, identifies the ruins as having a negative impact. It is true that, as Lord Methuen pointed out in 1947,  the extension of the buildings onto the axis to the Echo was “unfortunate”, and the replacement of the walls with a more appropriate setting should be welcomed. As part of the developing plans around the house the walls will be gradually reduced, though Norman Routledge who now owns the house and area immediately around it intends to retain certain sections. The remains will be carefully photographed ahead of this work and serve as a permanent record of this failed project.

Head on over here to our monthly update to find out what’s happening around the estate.