A garden can be a very transitory thing. At Kings Weston we have the buildings, most of the remaining parkland features, and many mature trees, but we are missing an important dimension of its history; its flowers. To get an insight of how flowers might have been used at Kings Weston it has been helpful to try and understand the people who lived their and their passions. Research has recently uncovered details of the life of Sophia, Lady de Clifford, wife of Edward Southwell III, and has helped us gain new insight into the estate. 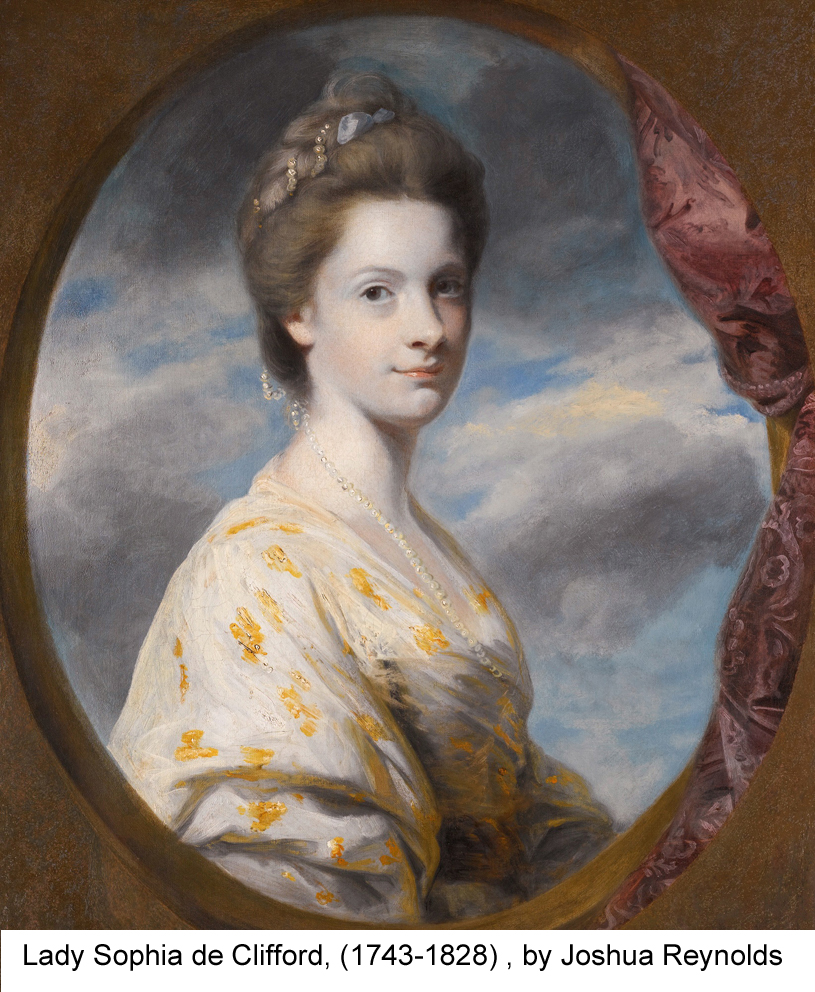 Sophia was from a wealthy and influential Irish family, the Campbell’s of Mouth Campbell, and married Edward Southwell in August 1765. Their marriage seems to have been one of love rather than simple convenience, though a substantial dowry would not have been unwelcome to Edward who had ambitious designs for his political career as well as for Kings Weston. Sophy, as Edward affectionately called her, bore nine children. In 1776 she became Lady de Clifford when her husband successfully established his claim to a Barony. Their happy life together was cut short suddenly when, in the following year, Edward died.

On his death their son, also Edward, was still in his minority, and executors took control of Kings Weston. Sophia received a regular allowance from the estate, but the house was no longer hers, and, now as the Dowager Lady de Clifford,  she would have been obliged to start a new life for herself. It appears she had moved out by 1786 when a contract for maintaining the grounds by an external contractor, rather than staff, was agreed by the executors. 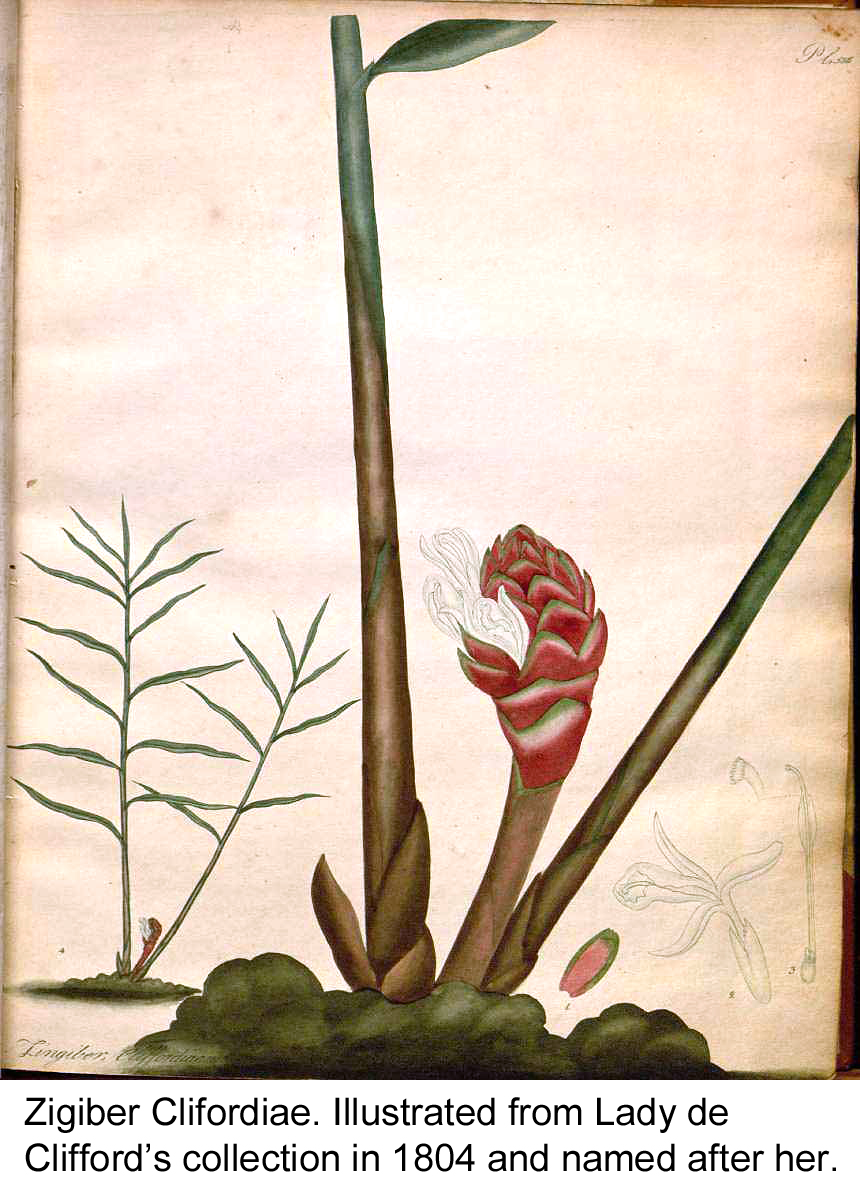 We have little personal detail about Sophia before this time – perhaps she was in the shadow of her husband – but in the decades that followed she made her own impression on the world, driven by a passion for plants. Starting first at a house she rented at Nyn Park, near Barnet, and later moving permanently to a villa in Paddington, she built up a nationally important and famous collection of exotic flowers brought there from all corners of the known world.

Between 1793 and her death in 1828 the popular botany journals of the time brimmed, not only with illustrations of plants she’d nurtured, but also great praise for her scientific approach to Botany which “all the collectors and professors of science stand much indebted for the zeal and patronage which her Ladyship has shown in her endeavours to promote it”. Titles such as Botanists Repository, Botanical Register, Exotic Botany and Curtis’s Botanical magazine all relied heavily on access to her unrivalled collection, and several plant species were named in

honour of her (though subsequently names have altered). At least three books on the growing of flowers and other exotics were dedicated to her during the same period.

Many of her plants were grown from seed or bulb in her hothouses, stove houses, or conservatory, and in this way she was identified as the introducer into the UK of such plants as the Australian Waratah, and a South African Ixia. Some-such plants were amongst the only growing in Europe, and the collection boasted imports as far-afield as Minorca, the West Indies, Guinea, Ceylon, and Mauritius.

What then can this tell us about Kings Weston? Its certain that Sophia nurtured her fascination with flowers from an early age, and when she married Edward she would have found in him a shared interest in gardening. The design of the eating parlour fire surround with cascading roses, completed in the year of their marriage, is sure to have been designed to delight her and the incorporation of the two tiny forget-me-nots was a symbol of their union.

As the refurbishment of Kings Weston House continued Sophy’s taste must have begun to exert itself. Whilst Thomas Stocking’s stucco ceiling in the eating parlour was rigid and formulaic, that of the Drawing Room, designed the year following, is an explosion of flowers swagged, and re-swagged across the whole  of its surface. The flowered theme was reprised in the design of the Saloon (Main Hall) where roses, tulips, jasmine, and more sprigs of forget-me-nots dance around the ceiling. 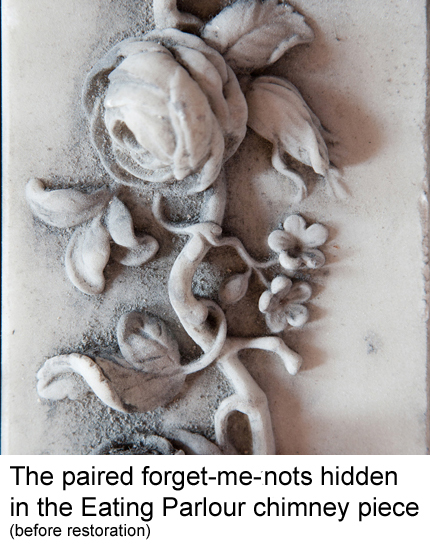 Before their marriage Edward had already begun the construction of the walled gardens and stables behind the house on present Napier Miles Road, but it may have been to satisfy Sophy’s growing interest that in about 1772 a vast new glasshouse was constructed on a former orchard. Stretching over 30m in length, and carefully orientated southward to gain maximum benefit from the sun it once projected far above the roof of the adjacent stables as a major feature of the estate. Its ruins, still standing almost 7m tall, can still be found close to the stables and ice house. 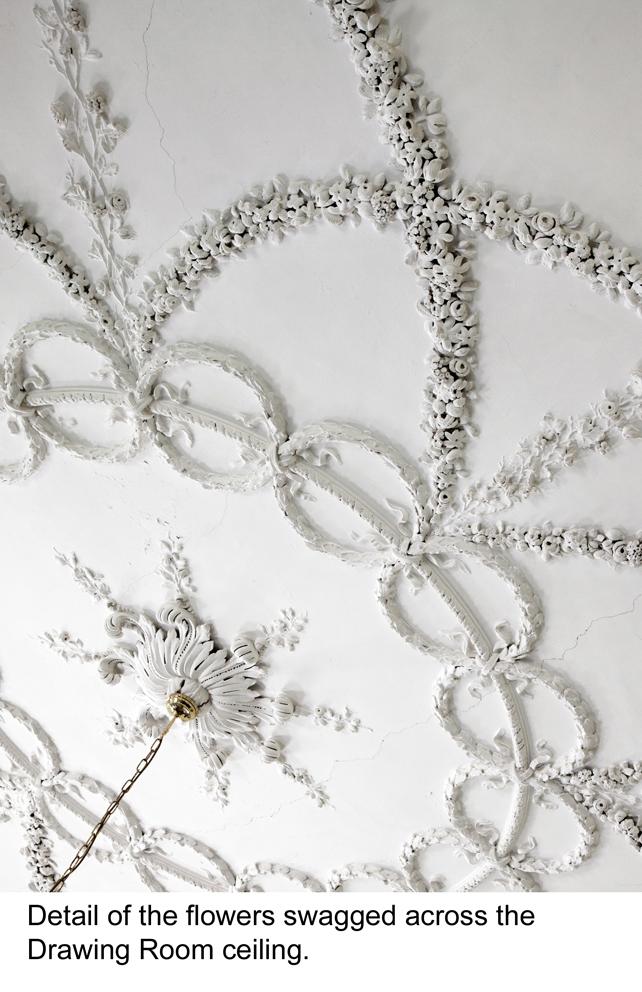 The garden designer Thomas Wright greatly admired the glasshouse on a visit, but the French diplomat Malesherebes gives us the only scant detail as to what grew there. Writing in 1785, after Sophia had departed, he noted “the vast hothouses, and a house made ​​entirely of glass, both walls and roofs, which is 54 feet long by 30 wide. The exotic plants think they are in the natural earth, and I have never seen such beautiful bamboos or Bengal figs anywhere“.

Whilst reforming the parkland of Kings Weston was the obsession of Edward, the gardens must surely have received attention from Sophy too. The 1772 estate plan by Issac Taylor offers tantalising suggestions of planting around the Echo, the ‘Terras’, and in other areas, where flowers may have played a more intimate role. Sadly we have nothing to tell us of what might have been, but for the fascinating legacy of Sophia, Lady de Clifford.