A book exists in Bristol Record Office called the Kings Weston Book of Drawings (KWBoD). It’s a fascinating volume comprising numerous original Eighteenth Century drawings for Kings Weston house and surrounding parkland features. The most visually attractive of the pageshosts a drawing for a pair of sphinx proposed for the “cheeks of the great steps”. Now long lost these once guarded the main entrance of the house before falling victim to changing fashion in the 1760s. 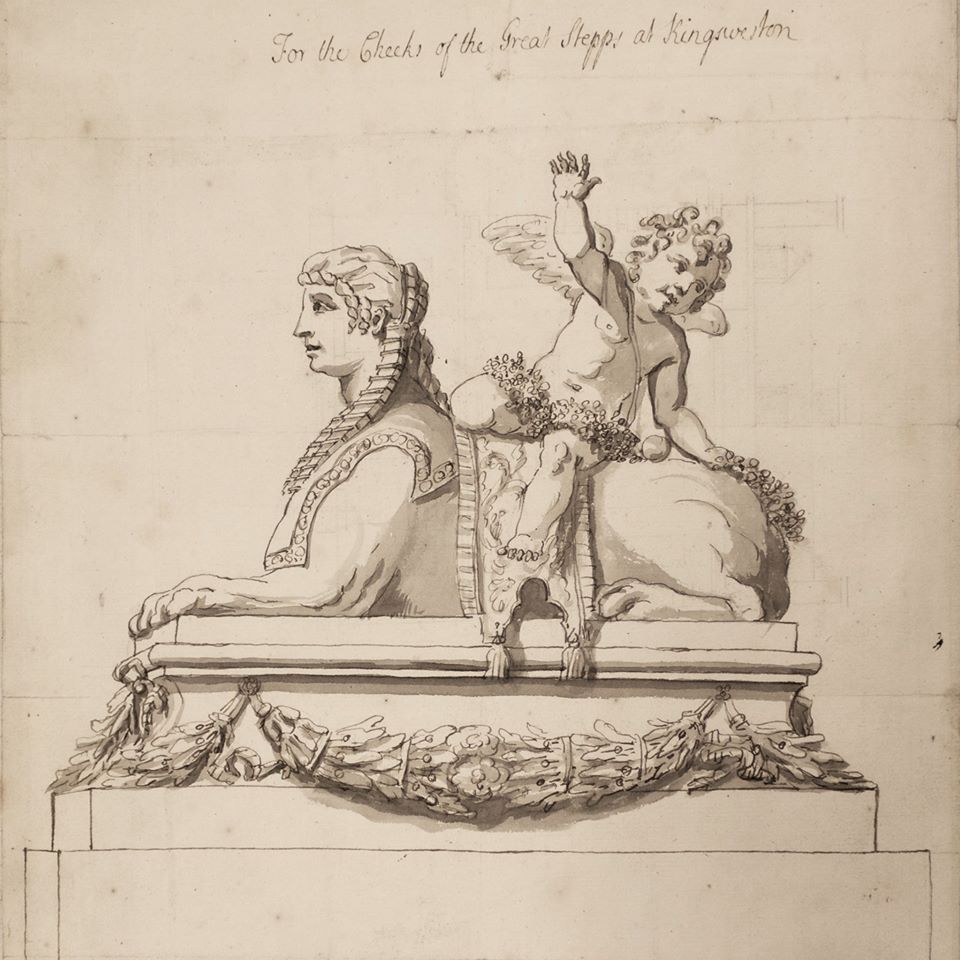 Drawing in the Kings Weston Book of Drawings, Courtesy of Bristol Record Office

Print of the sphinx at Versailles, published by Jean Lepautre in Vues and Plans, 1667

However ornamental the pen-and-ink design held in the KWBoD is it was not an original one. It was copied, quite meticulously, from an engraving of an identical sphinx in the gardens of Versailles. The original designer was Louis Lérambert who in 1664 provided a wide range of sculptures to the palace, but it was through the engraver Jean Lepautre that the design arrived at Kings Weston.
Lepautre was a well regarded and successful designer and engraver operating in late Seventeenth Century France. He published a number of lavishly illustrated books focussing on Versailles, including his seminal work ‘Vues et Plans de Versailles’ in 1675. It was from this book that the designs for the Kings Weston sphinx had been copied.

This month we’ve made further discoveries linking the work of Lepautre to Kings Weston. By chance an engraving of his came up for sale. It depicted a design for a fictitious building not dissimilar to the Echo. With a new rigour we returned to Lepautre’s work and began reviewing it for any other commonalities. Trawling through the many hundreds of designs he produced there dozens for numerous garden pavilions, interiors, decorative motifs, and statuary. After a brief time we discovered an engraving of the imaginary ornamental urn illustrated here. It’s identical to one of the painted, gilded urns in the stair hall of Kings Weston House and is further evidence that Lepautre’s work was influencing designs during construction between 1712 and 1719.. 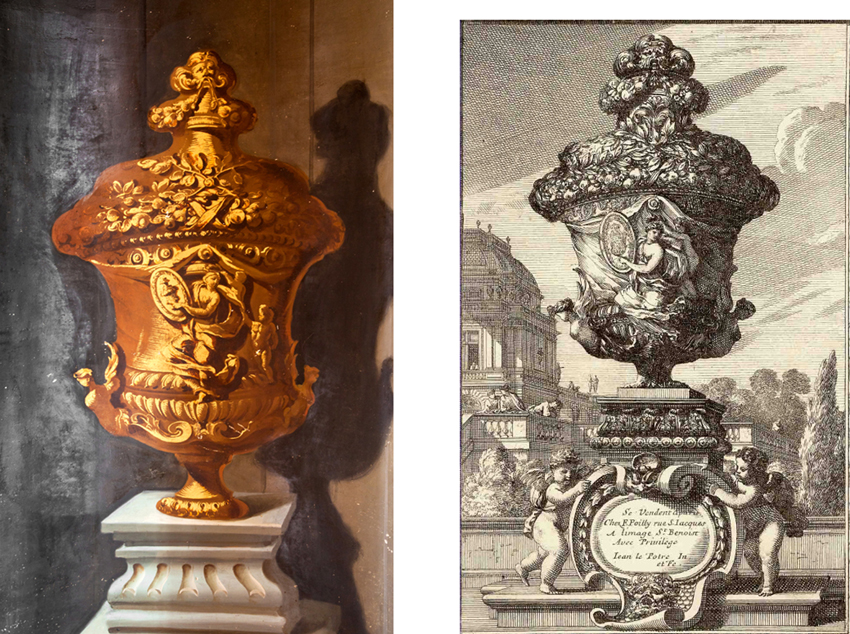 Left: The painted urn in the stair hall at Kings Weston, circa 1719. Right, the engraving of an imaginary urn by Lepautre.

Lepautre’s oeuvre also contains another print of a building of particular interest, and one that would certainly have influenced the invention of his own Echo-like building that began our recent quest. The building is the Grotte de Tethys, an extravagant artificial cave designed for the gardens at Versailles by the architect Le Vau in 1666, and published in Vues et Plans . The grotto was set close to the palace and at the head of a long promenade stretching out into the park. The Echo would once have shared a similarly formal garden context terminating a long formal axis from Kings Weston house. Like the sphinx the symmetrical arrangement of parterres and “French alleys” were swept away in the 1760s during Edward Southwell III’s aggressive rebranding of the estate as vehemently English political powerbase.

Features in both of Lepautre’s engravings, such as the triple-arched loggia, the rusticated stonework, cyclopean keystones, and the forest of urns feel very familiar when looking at the Echo. Could these ideas have been filtered through Vanbrugh’s genius to give Kings Weston its own little piece of Versailles? If so this influence can only have come through engravings because by the time the Echo was built the grotto at Versailles had been demolished for almost forty years.

One last piece of evidence supports Lepautre’s influence over Kings Weston and its gardens. In the 1834 auction catalogues that mark the end of the Southwell family’s reign there two books noted; Lot 764: Le Pautre’s designs – 1667 calf bound sold for £1.18.0 and Lot 765: Le Pautre’s designs – 1667 calf bound sold for £1.11.6. Sadly there is no mention of the Versailles book in the catalogues, but these earlier volumes are likely to have been Lepautre’s own designs compiled into the pattern books that helped spread his stylistic influence through Europe. Although we cannot be sure when they entered the Southwell’s library their appearance is unlikely to be coincidence. Could these have been the reference sources for more at Kings Weston than we are yet aware of?