Most of the family members of the owners of Kings Weston House are buried in the parish church at Henbury. We have posted a few of the most important memorials here before including one by the famous sculptor Grinling Gibbons (1648-1721) for Sir Robert Southwell.

Now we have identified ANOTHER important Grinling Gibbons monument in the church and dedicated to Sir Robert’s wife Elizabeth Dering and their son Rupert. After Elizabeth’s death in London 13th January 1681 her body was brought back to Kings Weston and buried, but the memorial wasn’t set up until some time later. When it was it was a far more elaborate and accomplished piece of work by Gibbons than Sir Robert would have as his own stark memorial. 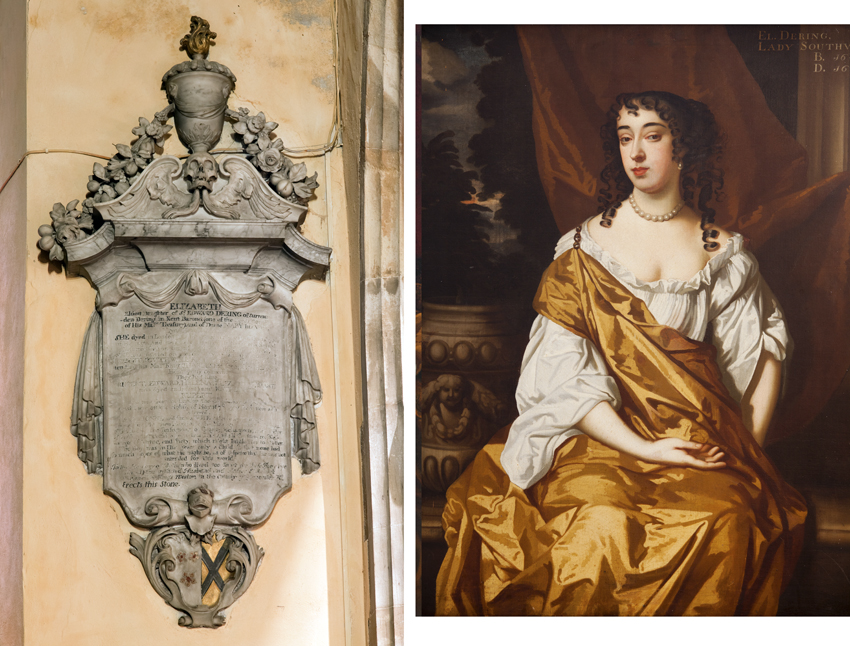 Grinling Gibbons’ memorial to Elizabeth Southwell of Kings Weston and her son Rupert, both buried in Henbury parish church. On the right is her portrait which still hangs in Kings Weston House.

Grinling Gibbons received £20 for his labours on the monument in 1684 and a further £30 was paid to his business partner Arnold Quellin in October the following year who ‘composed’ the inscription.

We are able to make the identification of this monument by Gibbons thanks to the help of Roger Forse at the church who kindly offered to seek out Elizabeth’s memorial for us, and it appears here for the first time properly identified as a work by one of Britain’s foremost craftsmen.